The Semel HCI Center 2018 Celebration–titled “HCI Revolution: Together We Thrive!”–celebrated social relationships and highlighted the value of these relationships to health and well-being. Inspired by the 2017 launch of the EngageWell pod, this event sought to explore the intersection of social well-being with music, technology, culture and neuroscience through insightful speakers, compelling panel discussions, and engaging activities and performances.

The celebration was attended by more than 1,000 students, faculty, staff and community members. The evening began with a fair featuring poster displays from 35 graduate and undergraduate student groups that received Semel HCI funding as well as four Global Food Initiative fellows. In addition, the Pauley Pavilion concourse hosted other activities that celebrated the many pods and student groups that make up Semel HCI. Each pod presented a creative activity to engage the crowd while sharing their pod’s accomplishments. Activities included a taste test of favorite recipes from the Flex Bar at De Neve dining hall, a giant parachute game, a line dancing workshop, life-sized Jenga, a gratitude letter writing station, a campus mapping station to identify underutilized spaces for activation, a photo booth and an engaging scavenger hunt.

Upon entry to the event, participants were given a Semel HCI “passport” and invited to interact with presenters from each pod to receive a sticker and fill in their passport. Completed passports were entered into a raffle to win a variety of prizes. Guests were serenaded during the fair by Resonance A Cappella group, greeted by UCLA mascots Joe and Josephine Bruin, invited to participate in the Semel HCI photo booth and received snacks from event sponsors.

After the fair, attendees moved into the Pauley arena for a live show focused on social well-being. As they filed in, attendees were greeted by a real-time phone quiz led by ResearchWell exploring crowd perceptions of social well-being in addition to a slideshow of photos from the Semel HCI photo booth, a custom video provided byIllumination Entertainment, and the inaugural screening of the jane b semel HCI Community Garden video created by undergraduate videographer Gray Zeldes.

The live show began with Chancellor Gene Block taking the stage to introduce the evening and welcome guest speaker, journalist and author Maria Shriver to the stage for her reflections on social engagement and technology. Chancellor Gene Block then returned to the stage to announce Jane and Terry Semel’s commitment to support the creation of the Semel HCI Center at UCLA. Jane Semel joined Chancellor Gene Block on stage to celebrate and shared her reflections on this exciting announcement, which was followed by remarks from Associate Vice Provost Wendelin Slusser on the relationship between health and social well-being and proactive ways to take ownership of one’s social well-being. Associate Vice Provost Wendelin Slusser, Chancellor Gene Block and Jane Semel then announced the 2017-2018 awardees of the jane b semel Healthy Campus Initiative Appreciation and Recognition Awards.

The live show was followed by a reception in the Pauley Pavilion concourse featuring grab-and-go bowls from Everytable and a performance by Mindful Music. 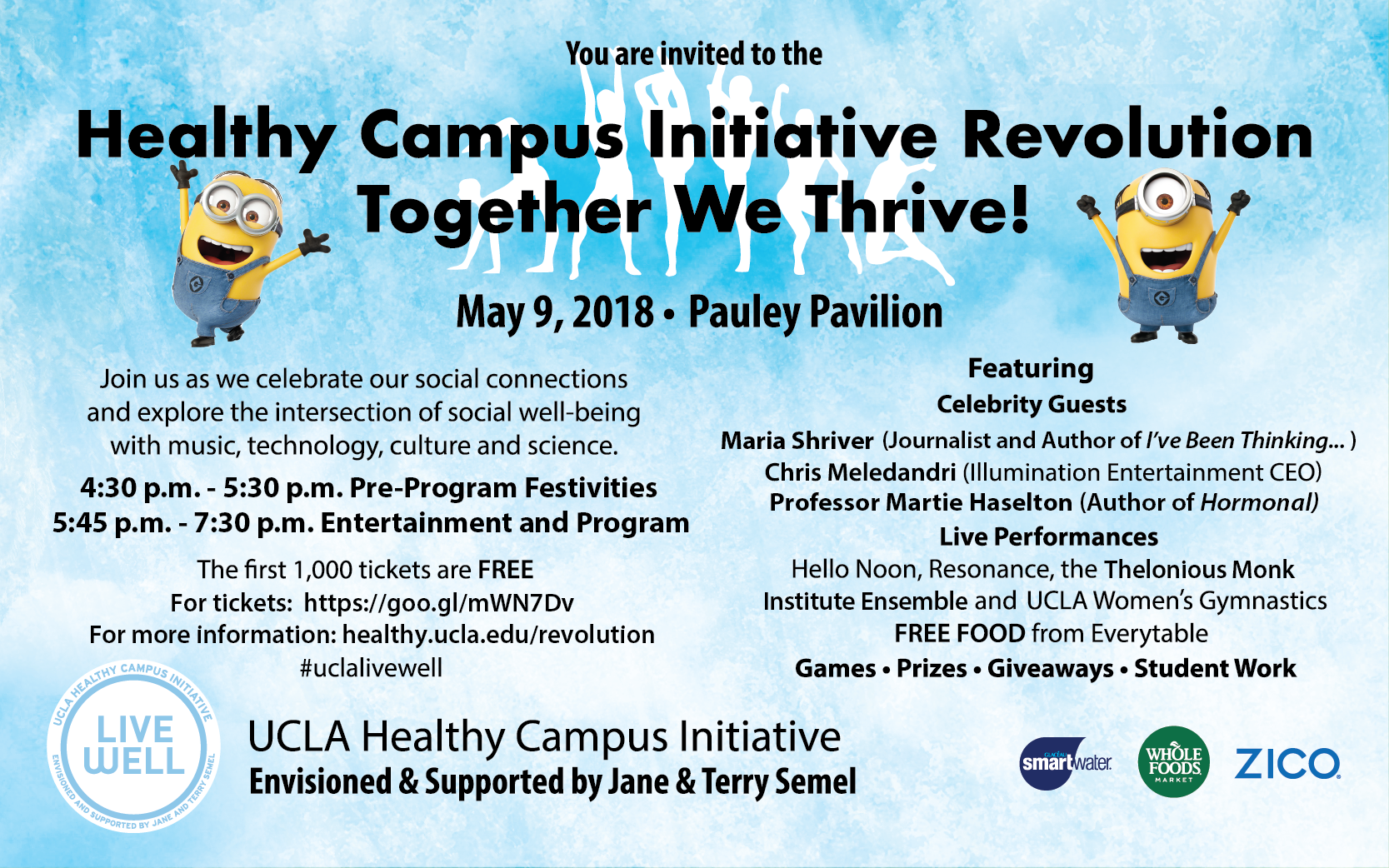